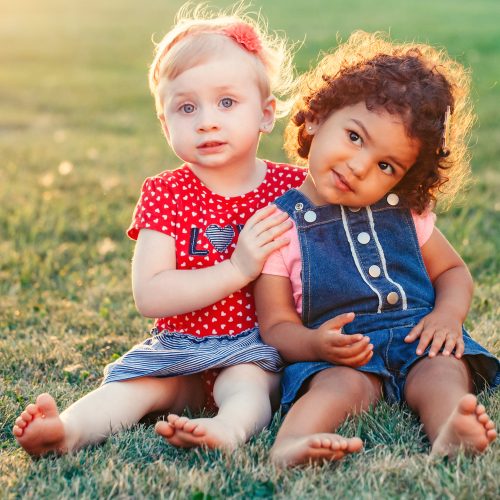 I’m not one to question the value of demonstrative love and affection.  Giving hugs is such a reflex for me that I embarrass myself by hugging people I barely know. I’ll often come to my senses midway through the ‘hello’ or ‘goodbye’ hug — too late to catch myself. This creates some awkward moments, but (I hope) my kind intentions are understood.

But with children, especially infants and toddlers, I believe we must be careful.  If a child (who is not my own) reaches out to me, I will gladly receive his hug, but I would never hug a child without asking first. And unless I knew the child well, I wouldn’t ask.

Occasionally I receive a hug from a child I don’t know at all, or may have met once. This makes me feel honored, but I also wonder: does this child give away her love too easily? Does she have safe, healthy personal boundaries?

I also worry about the child whose abundance of affection (which has undoubtedly been encouraged by adults because it’s charming, endearing and certainly beats the alternative) makes it difficult for her to control an impulse to hug, kiss or touch too much. This may bother and upset her peers, even scare them, and cause her to be reprimanded by adults. Will she feel shamed? Will her affectionate nature be discouraged?

How do we encourage a child to be loving and affectionate, but also develop healthy personal boundaries, and respect those of others?

A child learns respect when she is respected. This begins when we see from our baby’s point-of-view. Most of us can imagine preferring the opportunity to anticipate a touch and would rather be warned before being picked up, not hastily scooped up from behind.  And although it may feel strange to talk to a baby at first, it soon becomes second nature. Slowing down our speech, our movements, and especially our touch makes a baby feel more involved in the activities we share, more considered and respected.

Since our hands are our babies’ welcome to the world, make it a gentle, peaceful and welcoming place for him by touching softly and slowly.

Although it can be awkward sometimes, ask others who touch your baby to do these things, too.

2. Deal politely, but firmly with the adoring stranger.

A recent commenter on my post, Big Bad Mama, expressed her discomfort with the “little white lies” she was telling strangers to keep them from touching her baby. If there is a time for white lies, protecting our baby may be it. I always found it worked best to say, “He cries easily when touched,” or something like that.  Nobody wants to be responsible for making a baby cry!  If you have a rapport with the person and are comfortable with the idea of her touching or holding your baby, ask your baby first, and see if his body language indicates openness to the idea. Be sure to talk him through the situation.

3. Ask first. Encourage your child to do the same.

We will not always ask our own child if we can hug him, of course, though it is respectful to approach slowly and not grab him roughly or startle him. But with other children, whether they be friends’ babies or nieces and nephews, it is safest to ask before an initial touch of any kind. Treating our baby with respect, and then modeling respect for others in front of our own child is the best way to teach considerate behavior.

If your child becomes an openly affectionate “hugger” around other children, help him begin the habit of asking first. If you are nearby, talk to the child he approaches.  “Sam wants to hug you. Is that okay with you?” If the child seems unsure or indicates that it isn’t, tell Sam he can say “hi” without touching.

4. Protect your infant or toddler around large groups and older children.

Often, when a child either behaves aggressively by hitting or pushing, or is suddenly intent on hugging other children in my parent/toddler classes, the parents mention that the toddler was recently exposed to loving adults and older children that hugged, kissed or played roughly with him. Commonly, these are family gatherings, and the parent is uncomfortable intervening in what seems like a joyous time of bonding.  But regardless of the fun and the fact that the infant or toddler may have laughed and enjoyed himself, his boundaries have been broken, which can confuse him and may cause him to act out with other children.

The hugging and kissing I see in this situation appears to be aggressive behavior – albeit the more socially acceptable type — similar to the way an older sibling might seem to hug and kiss baby brother within an inch of his life. These are times when we must gently, but firmly intervene.

5. Give gentle acknowledgements rather than big hooplas for respectful, affectionate acts.

When we see our child give a spontaneous hug or kiss to a peer, it is almost impossible not to react with a joyful “Awwwwww!” But if we want to insure that our child continues to express affection genuinely and respectfully, rather than as a performance for us, it’s wise to try to temper our response, maybe say something like, “You gave your friend a hug. That was kind of you.” (We will still be quietly projecting how touched, amazed and proud we are.)

Our restraint is an investment that will guarantee more random, unsolicited, authentic acts of affection in the future. Many may even be directed at us. 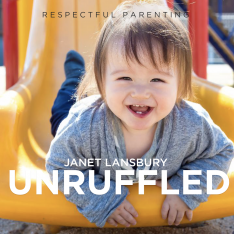 Teaching Children to Respect Personal Boundaries by Asserting Our Own 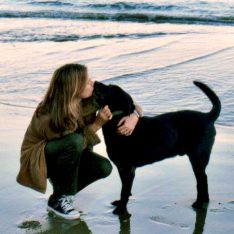 Teaching Our Children About Love And Loss 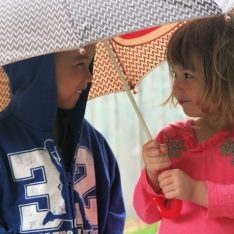 7 Happiness Tools We Can Give Our Children